Whether we like it or not, there are some corporate logos so ubiquitous that they crept into our subconscious. In his latest series, artist Tom Galle, known for his clever works that explores the impact of corporate culture on our everyday lives, takes famous brand emblems and fashions them into weapons: the Facebook logo turns into a crowbar, MacDonald’s golden arches are transformed into a knuckleduster, and a razor-sharp blade is formed from Nike’s iconic swoosh. “Anything but harmless” is what these logos-turned-weapons seem to express.

Exposed in shops around the exhibition area, they seem to be precious objects that one can buy, and thus highlight the silent danger of the advertising industry. These powerful brands that have become ordinary in our societies have a considerable impact on the environment and our private lives. With this artwork, Tom Galle lets us picture ourselves wearing the brutality of corporate companies as highly contemporary fashion items. 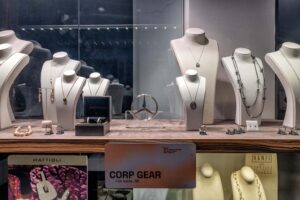 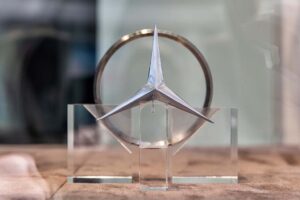 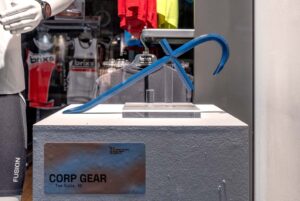 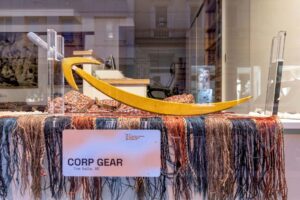 Belgian-born Tom Galle is a contemporary web artist, currently working and living in New York City. He creates game-changing visual displays, webpages, products, memes, and performative compositions. His work is saturated with the very essence of hyper-digital nowness. Galle’s online persona is deeply infatuated with the profound impact that the internet has had on our bodies and brains. His art is philosophical and political but also instant and accessible, effortlessly walking the line between academic art and internet meme cultures. His dark humor-laced practice can be seen as a telling indicator of the nature of successful art in the internet (and post-internet) age. He currently works as a freelance digital creative. Galle has worked for clients such as Nike, Google, Adidas, Toyota, Netflix or MTV and has won numerous industry awards including Cannes Lions, D&AD, Webby or One Show.